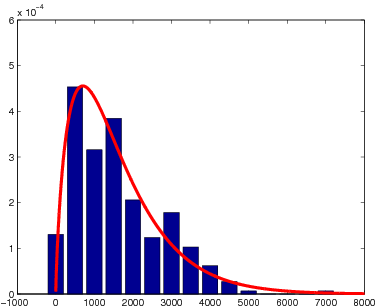 failures occur (there is an extension to non-integer number of failures). Our model is thus, that a minister’s incumbency ends after a certain number of failures (what ever that means in practice). The best fit suggests that under this model 1.79 failures are allowed during a minister’s incumbency and that failures are relatively rare events happening with probabilty 0.11% every day, i.e. on average the first failure happens approximately at day 900.

You can test other two-parameter distributions by changing dist, e.g. to 'logn' or 'gam'. If you want to check one-parameter distribution you have to further remove ,par(2) from the code. It turns out that also the gamma distribution delivers a fit which is not rejected. This is reasonable because it is sometimes seen as the continuous-valued version of the negative binomial. Also the Weibull distribution was not rejected (although with much lower p-value), this shows that also other models might be appropriate. As always with statistics and real world data, I assume that the KS-Test would reject my theory when we have a larger dataset, as certainly some deviations from the negative binomial trend get dominant (e.g. caused by election cycles).

I hope this “finger exercise” on finding a simple stochastic model that fits is inspiring for political scientists, although every political theory would likely immediately reject it.

This site uses Akismet to reduce spam. Learn how your comment data is processed.